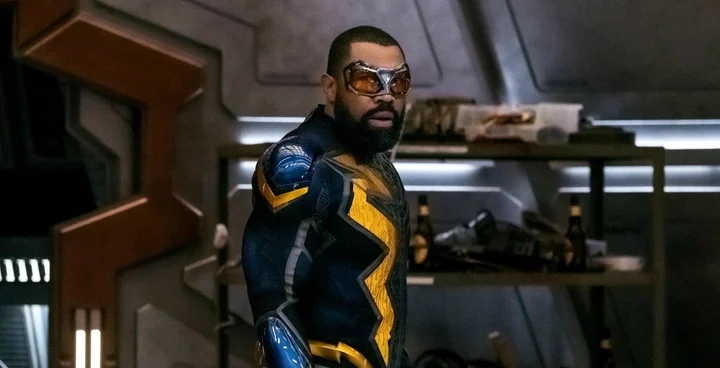 Black Lightning finally joins the Arrowverse in new photos from Part 3 of the upcoming Crisis on Infinite Earths crossover. Hype has been building for the crossover since it was teased during last year’s Elseworlds event. It also helps that, unlike past crossovers, Crisis on Infinite Earths has already been referenced many times on The Flash and Arrow, especially during this season. This makes sense, as both heroes are predicted to die during the Crisis.

Up until now, Black Lightning has been the sole DC show on The CW to take place outside of the Arrowverse. However, since the series premiered January 2018, it’s only missed out on one crossover. Elseworlds was also already a smaller event than the Arrowverse has done in the past; Legends of Tomorrow also sat out the fun that year. However, for Crisis on Infinite Earths, characters from all The CW’s DC shows will take part, including Supergirl and the new series Batwoman. The crossover will air over five episodes starting in December and concluding in January 2020.

CBR revealed the new photos, which come from Part 3 of the crossover, aka the last episode to air before the midseason break. Though Part 3 is technically an episode of The Flash, the photos show that it really is one long event, with little distinction between the hours. For example, most of the new pictures show the characters on Legends of Tomorrow’s Waverider instead of in Star Labs. In addition to Black Lightning, they also offer a look at Cisco suiting up as Vibe once again, The Monitor chatting with various heroes, and the returns of both Lex Luthor and Earth-90’s Flash. Check out the photos from Crisis on Infinite Earths Part 3 below:

These photos are also notable for showing two of the three Supermans who will take part in Crisis on Infinite Earths. As was revealed over the summer, Tyler Hoechlin will return as the Arrowverse’s Clark Kent and will be joined by both Lois Lane (Elizabeth Tulloch) and their new baby. Meanwhile, Brandon Routh, who usually plays Ray Palmer/The Atom, will don the cape once again after playing Superman on the big screen. However, he’ll play the Kingdom Come version of the character. If two Supermans weren’t enough, Smallville’s Tom Welling will also take part in the crossover, in a reunion with that show’s Lois Lane, Erica Durance.