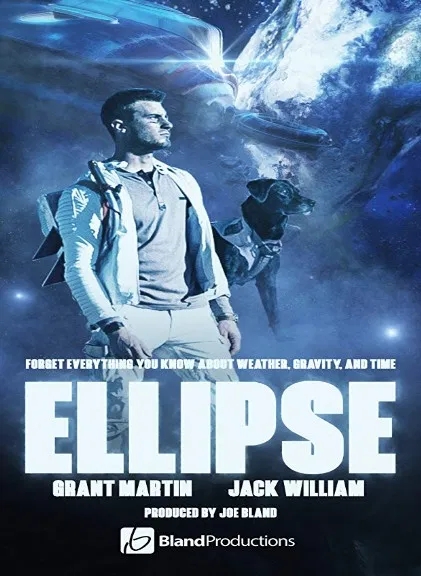 Ellipse – Grieving widower Rauge (pronounced “Rawj”) has hit the bottle hard, which isn’t a great idea as a space pilot surveying new planets. When he crashes on Ellipse, an oblong planet, the gravitational variation causing accelerated aging doesn’t particularly concern Rauge in his self-destruction, but the damage it’s doing to his beloved middle-aged dog Mac is a crisis. Desperate to keep his best friend by his side, Rauge must traverse the chaotic gravitational terrains of Ellipse to get Mac off the planet before it’s too late and he loses everything.
Ellipse is not what I’d call a bare-bones movie with its green screen and CGI effects, but the intimacy of having one main character and one main dog on screen for the majority of the movie makes it feel very small – despite being set over two planets. Grant Martin (Rauge) isn’t a particularly strong actor, but he does a functional job in a tough role. The dialogue can be a bit clunky as they find methods for Rauge to espouse exposition. Further, it’s not particularly about science; Ellipse takes the liberty of reversing the law of time dilation for its plot. Despite those shortcomings, the story of the relationship between a man and his dog makes Ellipse infinitely watchable.