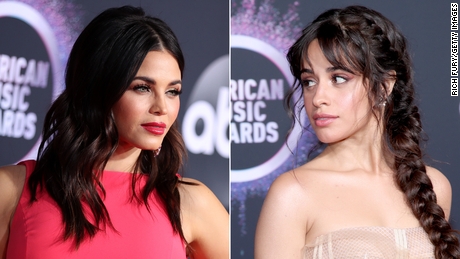 (CNN)In terms of celebrity beefs, Jenna Dewan is insisting this one is a nothing burger.
Some Camila Cabello fans thought Dewan was being critical of the singer during her performance at the American Music Awards Sunday night.

It all started with a since deleted tweet which accused Dewan of mouthing to her date for the evening, friend and stylist Brad Goreski , that Cabello was being “extra” during her performance of “Señorita” with Cabello’s reported boyfriend Shawn Mendes.

Dewan, who is expecting her second child and first baby with boyfriend Steve Kazee, had posted video of Cabello’s solo performance (she took to the stage a few times Sunday night) on her Instagram stories, writing “Yassss” with some fire emojis.
[the_ad id=”441″]
So the actress was confused when people started reaching out to her about “shading” Cabello.

“I’m getting a lot of text messages from people wondering if I was shading Camila,” Dewan said in the video she posted on her Instagram stories. “No! I love her. I love her so much. I’m such a big fan of hers.”

The 38-year-old star added “I don’t understand what that’s about but no, I love her, love her, love her.”
[the_ad id=”441″]
Goreski co-signed that in the video.
“Guys, we were bumping and grinding so hard to ‘Señorita,'” he said. “We’re obsessed.”

It’s doubtful the 22-year-old singer was worried about it, regardless.
She was too busy performing, including joining Taylor Swift and Halsey for a rousing rendition of Swift’s “Shake It Off.”