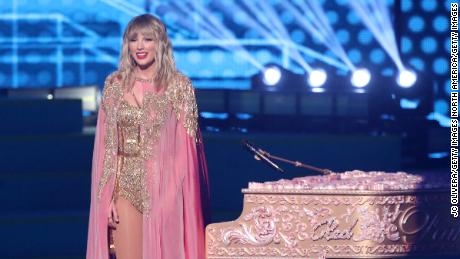 (CNN)Taylor Swift delivered a powerful performance at the American Music Awards and made history by becoming the artist with the most wins of all time.
Without directly calling out the public feud between Swift and her former music label, Big Machine Label Group, she sent a not-so-subtle signal with her song choice on Sunday.

The singer performed a medley of her greatest hits in honor of being awarded Artist of the Decade and she kicked it off with “The Man” off her latest album, “Lover.”

“I’m so sick of running/As fast as I can/Wondering if I’d get there quicker/If I was a man/I’d be the man,” Swift sang.

Swift and music manager Scooter Braun have been in a dispute since he purchased Big Machine Label Group in June. The feud escalated recently over recording rights and whether Swift would be able to perform some of her early music at the AMAs.

She ended up performing songs from throughout her career, including, “Love Story,” “I Knew You Were Trouble” and “Blank Space.” She also sang “Shake It Off,” with Halsey and Camila Cabello, and “Lover,” with a special performance by dancer Misty Copeland.

From left, Halsey, Camila Cabello and Taylor Swift perform during the 2019 American Music Awards on Sunday.

Carole King presented Swift with the Artist of the Decade award. The singer/songwriter took a moment to tell the world how much King’s music meant to her and her family.

“I cannot believe that it’s Carole King who gave me this award,” Swift said. “My parents are here tonight and they would listen to all of your records in high school.”

Swift won six awards total. She capped the night by winning artist of the year and made history as the performer with the most AMA career wins of all time with 26.

“The last year of my life has had some of the most amazing times and also some of the hardest things I’ve gone through,” Swift said in the final speech of the night. “I wanted to thank you so much for being the thing that has been a constant in my life.”