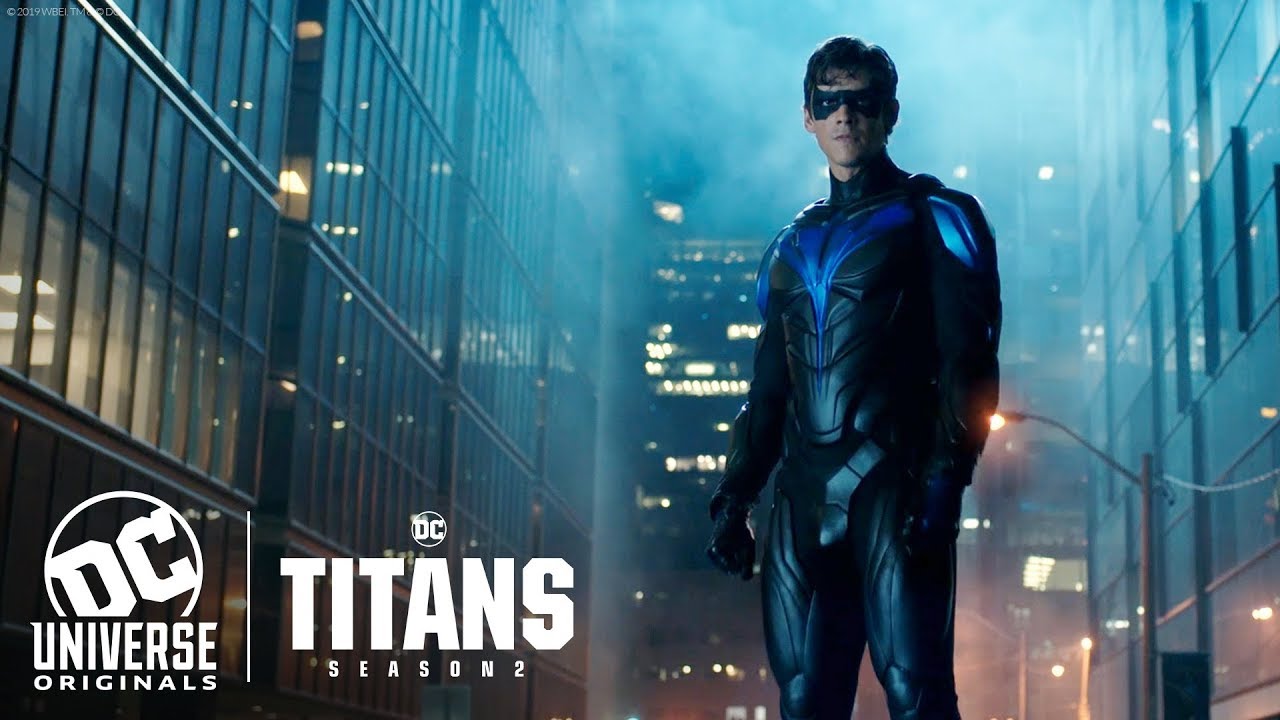 An official trailer has been released for the Titans season 2 finale – finally offering fans a glimpse of Nightwing in action. Debuting in 2018, Titans served as the flagship offering of the DC Universe streaming service. The show proved a hit upon release and was rapidly renewed for a sophomore outing. Though not without some lingering issues, Titans season 2 largely improved upon the first and expanded its popularity. As such, a third season has already been confirmed for 2020. Though Titans is very much an ensemble story, a bulk of the action and drama has centered on Dick Grayson (Brenton Thwaites) as he attempts to forge his own identity out from beneath Batman’s shadow.

Many fans assumed that transition – which would see him officially adopt his Nightwing persona from the comics – would culminate at the end of season 1. That hope only grew when, in a cathartic moment, Dick burned his Robin suit. Unfortunately, it wasn’t to be – especially when the original season 1 finale was scrapped and remolded into the season 2 premiere. Though the episode served to help Dick Grayson finally (and brutally) lay his Batman-shaped demons to rest, season 2 merely retconned the Titans’ history and gave Dick even more demons to brood over. Those demons now came in the form of the team’s comic book nemesis, Deathstroke, and the death of Slade Wilson’s son, Jericho. After much teasing throughout season 2, however, new official images revealed the Nightwing costume and confirmed it would feature in the season 2 finale.

Thanks to a season 2 finale trailer released by DC, fans don’t even have to wait for the episode to see Nightwing in action. The one-minute teaser offers a host of thrilling action as each of the season’s plot threads coalesce. With the previously disbanded Titans starting to reunite, a terrifying Slade Wilson unleashes an outright assault on the team. The midway point of the teaser has Deathstroke cornering Rachel, Starfire, Wonder Girl, and Dove with a barrage of gunfire. Fortunately, accompanied by the declaration that a Titan will rise, reinforcements appear in the form of a newly suited up Nightwing. Strolling casually towards Deathstroke and unveiling new electrically-charged batons, Nightwing engages his nemesis in a briefly teased showdown. Check out the full trailer below:

The long-awaited emergence of Nightwing is not the only thing teased, however. The machinations of Mercy Graves result in a newly brainwashed Gar being unleashed on a carnival. Joined by a similarly afflicted Connor Kent, it looks like it’s up to Wonder Girl and Hawk to combat the latter. Meanwhile, Rachel will seemingly take it upon herself to guide the former back towards control of his own mind. Rose Wilson is also seen in full Ravager costume, coming to Nightwing’s aid and finally standing up to her father. More dramatically, though, is the implication that a Titan will fall – with numerous shots of a funeral taking place.

Fans will obviously spend the interim days debating which Titan will be the one to die at the hands of a villainous force plaguing the team. Especially since the final line-up is conspicuously sans Rachel or Wonder Girl. Equally, the entire trailer features no sign of Jason Todd – potentially leading up to a surprise, ill-fated appearance and the beginning of Jason’s Red Hood arc. Then again, the question also lurks as to how many of the funeral shots are from reality and how much is from the dreams Rachel has been having. Whatever the case, however, most of the trailer’s elements will be eclipsed by the image of finally seeing Dick Grayson evolve into Nightwing.